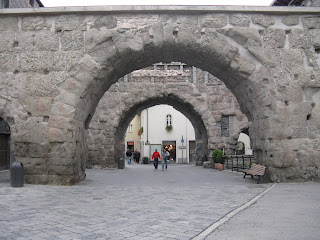 In the morning
I look out my window. Across the way there are mountains where last night there was only mist and miasma. It’s overcast but the clouds look benign. A good day for a walk around town. My pizzeria Hilton lies outside the city walls, so I make my way to the burly parallel triple-arched entryways of the eastern Porta Praetoria. It’s something to savour, entering a Roman city. You know you’ve arrived.
The Forum lies just north of the decumanus; it’s now the Cathedral square. Beneath the square and open to the public lies the arched, echoing underground horseshoe of the cryptoporticus, an immaculately executed and invisible construction that served no more profound purpose, apparently, than to level the ground under the forum. Behind the forum, against an Alpine backdrop, is the theatre. Aosta’s, like many Roman theatres, is used in summer for concerts.
I follow the length of the decumanus - through its transformations from Via Porta Praetoria to Piazza Chanoux to Via de Tillier to Via E. Aubert - to the Piazza della Repubblica, outside the old Porta Decumana, then make a circuit of the town to see the massy walls from the outside. The stones lodged in mortar look like hard, crunchy candy set in nougat. It’s a long walk. The walls still enclose the better part of city, though at an average height of about fifteen feet, they look highly pregnable. They were higher once, but the materials were dislodged and carted away over the centuries to be reemployed as feudal strongholds.
Twenty centuries have passed since the foundation of Aosta, yet it is still a Roman city. Like its name, worn from Augusta down to Aosta, the city’s other vestiges of Romanity, though eroded by time, have never been erased. 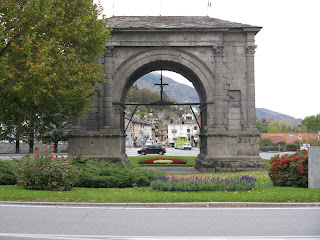 I admire the Arch of Augustus, erected in 25 BC, as soon as the Salassi had been defeated. The view through the arch has not been improved by the introduction of a cross. Past the Arch stands a postcard-perfect Roman bridge, which - according to the plaque - has arched gracefully over nothing in particular since the eleventh century, when a violent storm changed the course of the river Buthier.
The eleventh century! Then Sigeric would have seen the river running in its old bed. And no doubt he crossed over this very bridge as he left Aosta. Yes, Sigeric would have seen many of these things - the theatres, the walls, the gates and arches, the lay of the streets. And already they were ancient when he saw them, already they were in ruins.
One thing I do not find in my travels is any indication that I am on the Via Francigena. Not a way marker, not an arrow, no sign of pilgrim lodgings. The bookstores have an item or two, but nothing related specifically to pilgrimage in the Val d’Aosta. I ask the chatty proprietor in Bar Franca if she ever sees pilgrims passing through. She has no idea what I’m talking about. Neither does the professorial gentleman at the bar who, she assures me, knows “everything” about Aosta. He leads me out into the Via Croce di Città and directs me to the Roman amphitheatre, but the words “Francigena” “pellegrini” stir no flicker of recognition. 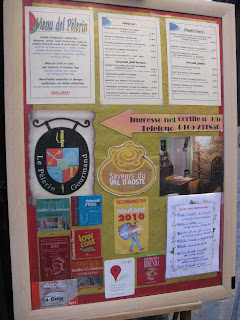 Then I seem to strike gold - in the shape of a restaurant. Le Pelerin Gourmand, “The Pilgrim Gourmet,” sports a gaudy scallop shell over its door and a “pilgrim menu.” Surely this is where I will meet the doyen of the local pilgrim scene, a proprietor/chef who has walked to Santiago as well as Rome, a fount of information and stories, a welcome mat to the foot-sore traveller, in short, a pilgrimage freak. It is a little suspicious that the pilgrim menu is priced far beyond the means of your average grimy mendicant. But that’s fine, pilgrims come in all income brackets. As it turns out, alas, the owners of Le Pelerin Gourmand haven’t taken a pilgrim step in their lives. They chose the “theme” for their restaurant based on the fact that it stands on the site of a former pilgrim hospice.
Having failed to turn up any pilgrim footprints, I direct my attention to a question that's been teasing me. Just how French is Aosta? And how did it come to pass that this satellite of the Classical Empire, this little Rome away from Rome, should have become the French-Italian heartland?
It's not that you’d ever mistake Aosta for a French city. Yet there is something, something fleeting, like a breeze from the other side of the Alps - a snatch of an overheard conversation, a bookstore or restaurant with a French name, a street sign or plaque in French... There are items on the local menu that you won’t find elsewhere: that melty cheese dish they call fonduta, known on the other side of the Alps as fondue; and cresperelle, those superfine rolled-up pancakes that are nothing other than crêpes. There's always something that distinguishes this place from Italy
I go looking for clues at the Tourist Information Office, located at the side of the magnificent Hotel de Ville (or should I say, Municipio?) in the central piazza (or should I say, place?).
“Can you tell me about the status of French in Aosta?”
“Aosta is bilingual. At school, we study in French and Italian equally.”
“But does anyone still speak French as a first language?”
“Probably not in the city. But in the mountains, I know people who speak French with their families.”
“And what’s the history behind all that?”
The woman behind the desk opens and closes her mouth a couple of times, goldfish-style. Clearly this is not a question that can be answered in a sentence or two.
“Here is a map of the city. Let me show you how to find the library.”
Posted by Robert Ward at 2:12 PM 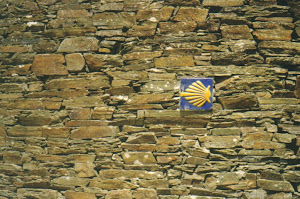